Venice: The destination that defies description

“A quality or feeling of mystery, excitement, and remoteness from everyday life.”

That is one dictionary definition for ‘romance’, one attempt to sum up in a few short words a concept which conceals a host of complex emotions and beguiling feelings.

Or at least that how I feel as I try to write about Venice, searching for words made up of simple letters of the alphabet which somehow encapsulate concepts such as romance, enchantment and wonder.

Because all of these words fit this true spectacle of a city, and yet they seem cheap and inelegant, my craft (if one could even call it such) unfit to paint any portrait of this place of many names, ‘La Dominante’, ‘Serenissima’, “Queen of the Adriatic”, ‘City of Water’, ‘City of Masks’, ‘City of Bridges’, ‘The Floating City’, and ‘City of Canals’.

And yet I’ll try and hope that Venice will forgive my poor attempt.

From the moment the traveler arrives at this marvel created from more than 100 islands, interlaced with canals and bridges, it simply captivates. If arriving by train (recommended the Italian train system is excellent) one emerges from the station into the light blinking off the Grand Canal, its shimmering presence palpably alive as it snakes between the stunning centuries-old works of art, otherwise known as buildings.

It’s almost impossible not to grin as one takes in the scene as visitors at one end queue for water buses while the smart motor launches which make up the private water taxi service endlessly moor, pick up (refusing to haggle on price) and then head out to their destinations.

Weaving between this turbulence are the straw hats and striped shirts of the gondoliers. While all these ingredients should ensure chaos there is a frenetic order to it all, a dance on the Grand Canal in which all know their parts.

Traffic is murder round here 😉 loving a bit of #Venice #italy

Choosing the private water taxi should be the only real choice as you watch the sardines try to squeeze on to the water buses to save a few euros. Stepping aboard the motor launch once almost instantly feels (if not looks) like George Clooney. And gliding through the canals, aboard a glamourous time machine as you watch the 14th Century play out in the architecture of the city on your own (for 30 minutes) boat is, in that moment, the height of glamour.

That sense of timeless style and sophistication goes into overdrive if you are staying at Venice’s Hotel Danieli. Your launch finally pulls up at the property’s private water entrance, here the trick is not to let your jaw hit the floor and act like you belong – and that’s a hell of a trick to pull off. 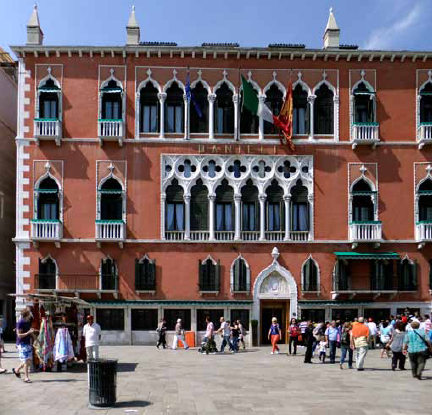 This entrance leads into the heart of the Hotel Danieli, the Palazzo Dandolo built in the 14th Century by the wealthy Dandolos, a noble Venetian family, who were famed for their social gatherings.  This sumptuous gothic building has survived the centuries, beginning life as a fully-fledged hotel in 1824 and for hundreds of years has been one of the finest hotels in Venice ever since.

The main architectural feature is the four-storied courtyard with arches in Byzantine Gothic style which could be lifted from the pages of Shakespeare’s Merchant of Venice. Once open to the elements this has been transformed into as luxurious a lobby as you are likely to find.

The foyer leads to the open stone staircases with balustrades leading up to the furnished rooms and suites, of which the Doge Suite is the height of glamour, with furnishings from the 18th century it is fit for a king, or a sheikh.

Throughout this property that timeless style has been retained so that one feels they are inside a Venetian drama playing out centuries before. In the rooms the bathrooms are Italian marble, the exquisite glass chandeliers are, as you would expect, curated on the nearby island of Murano and underfoot you have parquet flooring covered by intricately-woven oriental rugs. Neatly hidden away though at the trappings of modern life with free wifi and remote-controlled lighting and curtains.

Sitting atop the Danieli is perhaps its crowning glory – the Restaurant Terrazza Danieli. During the months of April to October its al fresco dining is one of the best spots, overlooking Venice’s stunning lagoon. Breakfast here is possibly the greatest way to start one’s day in this amazing city.

Is this the best spot for breakfast in #Venice #italy ? Could be!! #luxury #bucketlist @hoteldanieli

Not only is the Danieli a beautiful location in its own right, but it also in a fantastic location being a short stroll over one bridge – which itself is the viewing platform for the famous Bridge of Sighs – before you find yourself in the iconic St Mark’s Square with its stunning Basilica, the Doge’s Palace and the Museum of Venetian Art.

The Danieli is also the perfect place to dive into the mass warren of back streets, alleyways, canals, bridges and gorgeous hidden squares (Campos) which make up the patchwork quilt of Venice. This is a city to totally lose yourself and wander aimlessly, admiring the hidden architecture, the arts and crafts, the restaurants. Venice almost falls over itself to impress, and it doesn’t fail.

A final mention for the Danieli is that it forms part of Starwood’s Luxury Collection in Venice, with the global chain somehow pulling off a trifecta of total class with sister properties at the Gritti Palace and the Westin Europa & Regina. Like the Danielli’s Terrazza both have signature waterfront dining spots which are an absolute must.

The Gritti’s Club Del Doge enchanting outdoor terrace manages to be refined and yet relaxed at the same time, with its simple yet mouth-watering Venetian menu it’s the ideal spot for watching the sun glint off the Grand Canal as the Gondoliers ply their trade. Character’s such as Massimo whose broad smile and infectious humour while attending to your needs make an hour or two here a memorably pleasant affair.

The Westin’s La Cuisina, again in a stunning setting on the Grand Canal facing the Santa Maria della Salute Church, is an education in food. This is a lesson which one should set aside sufficient time to learn from Chef Alberto Fol, whether you opt for A La Carte or his Tasting Menu. Here local dishes from Venice and the region are given his unique twist with surprises in every course. It is simply five-star dining at its best, a sitting in which an artist paints his own portrait of Venice’s glory, with food as his palette and your cutlery as his brush.

There can be few cities which has endured such hype as Venice. Throughout the years it has been synonymous with romance, so much so that one could be forgiven for thinking that the reality could not possibly live up to one’s imagination.

Happily, for this traveler at least, the exact opposite is true. Venice surpasses my art to capture so heed instead my advice – discover it yourself and write your own story.